Cambridge driver Sam Collins has taken line honours aboard his Ford Mustang in race one of the BNT V8s Championship this afternoon at Pukekohe, winning the race overall and taking the victory in the BNT V8s Open class of the Championship.

Andre Heimgartner followed Collins to the line to claim second overall and winning BNT V8s class, Australian driver Alexandra Whitley in her Toyota Camry coming in second in class with the Holden Commodore of Rob Wallace in third.

The Open Class podium was rounded out by Blair McDonald and Eric Hennephof.

The race start saw Heimgartner and Whitley battle for the lead through the first sections of the circuit. The Toyota driver out braking herself into turn four, slipping down a number of places by the end of lap one.

“I out braked myself! Andre and I went two wide from the start all the way through turns one, two, three and four. A little bit of inexperience not knowing what the limits are yet, but I know them now and will know them for tomorrow,” said Whitley post-race.

Nissan Altima driver Nick Ross struck trouble on lap three, withdrawing from the race with overheating issues. The same issue recurring that he encountered in qualifying earlier in the day.

Meanwhile, at the front of the field on lap five, Heimgartner found trouble down the back straight, slowing significantly, allowing teammate Lance Hughes and Collins to slip through into the lead.
Heimgartner had made a radio call to his race engineer, inadvertently pressing the pit limiter button momentarily, causing his car to slow down the straight, the decrease in speed allowing Hughes and Collins to slip past.

“I did see that, I wondered what was going on!” said Collins post-race.

Running in a different class to Heimgartner, BNT V8 Open, Collins says it is still difficult to catch and pass the vastly experienced Heimgartner. 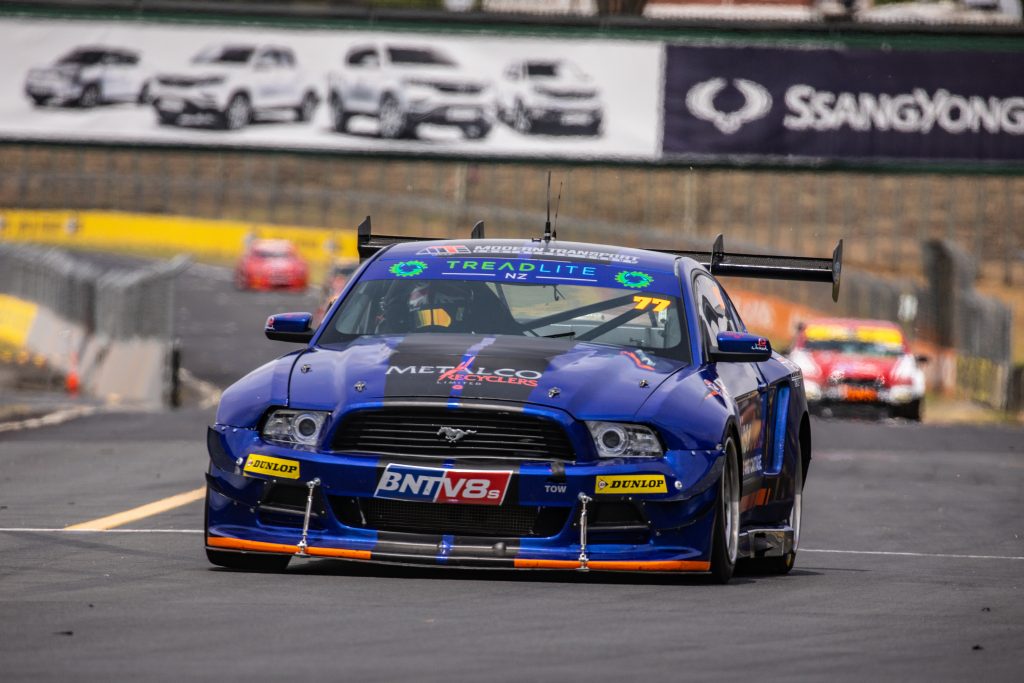 The Ford Mustang of Sam Collins.

“Andre is a very good driver, he can drive the wheels off anything. We do have a horsepower advantage, but I’m only in my second season in V8s and learning every session.”

“The car is performing really well at the moment. We changed the diff yesterday, we were running out of revs at the end of the back straight. We’ve gone to a higher gear and that’s really helped me.”