At Round Three of the NZV8 Series at Manfeild next month, the winning driver of Sunday’s feature will be awarded the most prestigious V8 Saloon Car trophy in New Zealand the Jason Richards Memorial Trophy.

Richards was a well-regarded driver by his peers on both sides of the Tasman and competed in the Australian Supercars Championship for ten years, before passing away in 2011 from adrenocortical carcinoma – an aggressive form of cancer.

Richards was a three-time New Zealand Touring Car Champion and since 2012 the Jason Richards Memorial Trophy has been awarded to drivers in NZV8s.

Such was the popularity of the driver amongst his peers there are actually three trophies.

A trophy is awarded at the New Zealand round of the Repco Supercars Series, while another is contested at Nelson’s KartSport club. 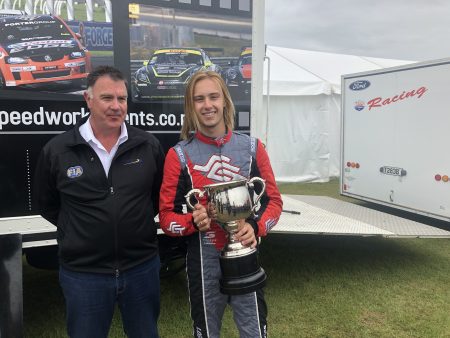 For Ross, who raced against Richards in karts as a teenager, the trophy has special meaning amongst drivers.

“Jason was such a great guy and was so hard to beat on track. He always had a great persona, and you’d hardly ever not see him smiling,” said Ross.

“When he passed away, a group of us who all raced against him at some stage in our careers wanted to do something in his memory, so we created this trophy.

Category management has also made some minor tweaks to the race formats for the Manfeild Round. With two 8 lap Sprint Races based on Marble Draws along with the feature race on Sunday now being a 40-minute Race that will feature a Compulsory Pit Stop with a ‘Balance of Performance’ time for the cars to serve in the Pit Lane, this is designed to create an even playing field for all cars entered.

The opportunity to compete for the most desired V8 Saloon Car Trophy in New Zealand is sure to entice a good field of V8 Saloon cars onto the grid.

Tim Edgell currently leads the series on 262 points, with Rob Wallace in second on 225, and Sam Collins in third on 124 all vying in the series title and the coveted ‘Collins and Sons’ Cup’s which will be presented at the end of the Season to first, second and third in the series along with prize money.

The next round of the NZV8 Series will be at Manfeild, February 12-14.